Skip to content
“A wonderful example of how a school should be: lovely, enthusiastic staff and happy, respectful and keen kids. It’s a gem of a place.” – Father Christmas – – – – – – “St. Anne’s is a happy place – like rainbows and sunshine.” (Pupil comment, S48 RE Inspection) – – – – – – ‘Pupils are eager to learn, take a pride in their work and are keen to do well.’ (S48 RE Inspection) – – – – – – All of the staff have always made me feel so welcome and well supported and the children are an absolute delight to teach. Having worked in many London schools over the last 6 years, I can honestly say you have something extra special! – ARTIS consultant – – – – – – An enjoyable week working with well-behaved students and engaged staff – Cycle Confident – – – – – – A lovely environment with extremely well behaved children. The only school I know where the door is held open by children – St Thomas’ Hospital (Optometrist) – – – – – – Thank you for hosting this day so beautifully. The classes from Y4 and Y3 were a credit to you – ARTIS Recruitment St Anne’s is a Roman Catholic Voluntary Aided Primary School for boys and girls aged 3 to 11 years. Our Nursery class takes children on either a full or part-time basis with a maximum of 26 during either the morning or afternoon session. 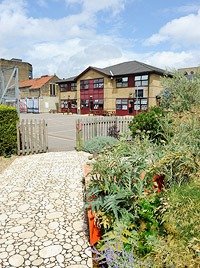 History of the school

The original buildings of St Anne’s school were opened in 1892 by Reverend William Brown. Emily King, a parishioner of the church, bequeathed £4350 in her will which paid for the school to be built. The original school was on Kennington Lane.

The school was extended in 1932 with the addition of two new classrooms. These rooms are still standing and now house year six.

The school as it stands today was built and opened in 1997 following the purchase of the site of the neighbouring bus garage on Durham Street. Following the opening of the new school, the old school was demolished. All that remains of the original building is the “1932 block”.

The school has been extended since then with the addition of two further classrooms and a first floor extension above key stage 1. This extension now houses our Inclusion Suite.

In memory of Mrs Savill – Letter to Parents.
Donations to Hope Church.